The Story Behind the Pickle...

Mmmmmm, I love the smell of pickles cooking.. Can you smell them from where you are? I just finished a batch of Lady Ashburnham pickles. If you live in my area you know what they are - to everyone else, I guess you would call it a mustard pickle relish. It's an old local recipe, supposedly the favourite of Lady Ashburnham of the early 1900's. Fredericton has many heritage buildings, and anyone who has lived here for very long knew Ashburnham House of 163-165 Brunswick St. (sadly, it was recently torn down.) It was originally two buildings, one an old inn and the other the residence of a city alderman. It's most famous occupants were Maria "Rye" Anderson and Thomas Ashburnham, the youngest son of Lord Ashburnham, the head of one of England's oldest families. As the fifth son, there was no expectation that Thomas would ever assume the title; after an army career and a decoration for bravery, he was sent to Canada, arriving in Fredericton as a typical remittance man, living on an allowance provided by the family.
Here Thomas fell in love with Rye Anderson, a common telephone operator and they married in 1903. Ashburnham purchased the two buildings on Brunswick Street and they were joined by a glassed-in conservatory forming a porte cochere which provided access to the back of the house and the beautiful lawns and gardens. Thomas resided in one house and his wife in the other. (Hmmm, not sure why....perhaps he didn't like her pickles??)
Unexpectedly in 1913, Thomas received word that his last surviving brother had died childless and that he was now Lord Ashburnham. His wife "the Telephone Girl" became the mistress of a vast estate, including a 100 room mansion. Her stay in jolly old England was not that enjoyable as she was not accepted by his family so they moved back to Fredericton in 1914 and became the "centre of an elite social life in the community". Apparently these pickles frequently graced the table when they entertained, but they were made by Lady A's sister Lucy; Lady A. herself was not  terribly devoted to "things domestic".  Lord A. continued to spend part of the year in Fredericton and part of the year in England, until his death in 1924. Lady A. lived on Brunswick Street until her death in 1938. (Info taken from Impressions of Historic Fredericton by Fernando Poyatos with text by William Spray.)
EDIT, Sept. 1  One of my commentors has sent me a link to an article on Lady Ashburnham, originally published in the Saint John Telegraph Journal, August 2010. Very interesting story... click here to read it.
Sorry... sometimes  I get carried away with a story... just thought my local readers might enjoy that snippet of local history... anyway, my pickles are done and cooling; tonight I will make a batch of Ratatouille. Can't do the Peach Jam yet as the peaches need to ripen/soften a bit more... 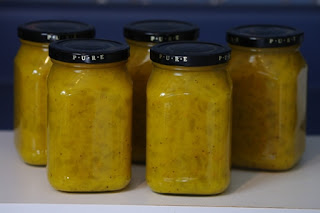 I went to our wonderful Saturday morning Farmers Market today. Came home laden with lots of fresh local goodies.. fresh picked corn for supper, fresh crunchy early apples, 5 lbs. of blueberries, red and green peppers, broccoli, beets... is your mouth watering yet? I love August and September when the produce is local and so fresh...
Several of you have inquired how my brother Wayne is doing. He is doing just fine, thanks for asking. His last visit to the surgeon went very well and he was told no more visits were required unless he had a problem. The foot has healed well and the bones are continuing to strengthen. He is walking albeit with a slight limp, and his foot tires easily but, hey, he still has the foot..and can walk again! We're not complaining. Today is his 45th wedding anniversary! Congrats Wayne and Shirley! What a wonderful choice you both made 45 years ago...
Love you both...

As soon as I saw your pickle picture I said "mustard pickle". Thank you for the history lesson. My grandmother from RI made the best mustard pickle and I make it sometimes. I absolutely love it with corned beef!

Enjoyed the history lesson,teach...nice to finally learn the story of my fav..pickle.

Would you post your recipe for those people who would like to have "famous NB pickles".
Did you get your corn from Hunter Bros? They are just up the road from where I live and we always eagerly await the first crop of the year!!

Linda, Lady Ashburnham pickles are my most favourite pickle ever invented..
my problem has been in the last few years I can never get the cucumbers.

Thanks for the local history for those of us "not from around here". Your kitchen work is inspiring. Not much going on in that area here. Linda G

Hi Linda! I loved seeing another local blogger talking about Lady Ashburnham Pickles! My Mom has been making them for as long as I can remember, and when I got old enough she basically gave me the "I'm not going to be around forever.. maybe you should learn how to make them yourself" line... probably because I was eating them too fast :-)

Now I make them, and my daughter is the one who goes through them like there's no tomorrow!

It's funny, I did not know until last year that Lady Ashburnham was a local connection. Maybe you saw the article in the Telegraph Journal about her? I just always assumed that "everyone" made Lady As... nope!

When I originally wrote a post about it, I was surprised at how many people were coming to the blog searching for information on the pickles.... so I decided to create a little mini site dedicated to Lady Ashburnham pickles. I know, I know... I must be crazy.. but I love those pickles so much, and it seemed that other people were interested in them too. It's nothing fancy, but it's my little piece of the internet to share with the world! :-)

Ironically.. as I write this comment, my latest batch of Lady A's is cooling off downstairs too! :-)

Sandra- recipe has now been posted.
Gwen- Sorry you don't live closer- I could provide you with all the cukes you want!
Karen- I thought maybe Lord A. was a dill man rather than a mustard man!! lol
Stephen- No, I did not see the article on her in the Telegraph Journal. Was it in recently? I tried your link but it didn't work. I'd love to read the article. Searched online too but no luck.

I'm disappointed that they removed the article (or hid it really well). I went looking for it last night.. I even went to Archive.org's wayback machine (which takes snapshots of websites all over the world, so you can go back and look at them if they're gone or have changed)... I can not find it at all. :-(

I believe that it was published last year. Might have been the year before, but I think it was last year. The years are starting to blend together.. uh oh.. not good!

I should have printed it out, but I never thought that they would remove it. Silly Telegraph Journal...

Oh, that's neat. I misse this post... I didn't know that these are locally known.. I thought everyone all over the world made Lady Ashburnham pickles.. Nice story, and it's good to know.

I almost can't believe this, but when I got to work tonight, I looked in my old email and found where I had copied and sent the original Telegraph Journal article to someone!

I've created a page on the blog, and corrected several pages that were screwed up after the last WordPress upgrade.

Thanks so much Steve!! I'll edit my post and add the link so others can enjoy the article too! Thanks again.