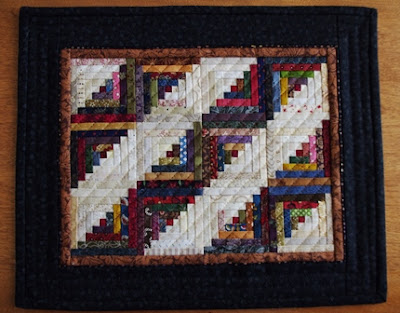 I have another small project finish to share with you today. The blocks for this miniature quilt have been made for .. ahem.. "a while" now. They are foundation pieced, on paper. The finished block size is 2 1/4” and each log is 1/4" wide. Finished quilt size is 10 1/4” x 12 1/2”. Have I told you before that Log Cabin is my all time favourite quilt pattern? Sure I have, but I think it bears repeating. I used Aurifil thread for the piecing of the blocks. Because it is a 2 ply thread, it takes up less space in the seams, a good thing when you're working tiny like this! I work on a number of blocks at a time, and switch back and forth between a light coloured thread with the light logs and a darker thread (usually grey) with the dark logs. I find this works well when foundation piecing, as thread sometimes shows here and there after the paper is removed and a stitch or two has "pulled."  I don't want light thread showing between dark logs, or vice versa! 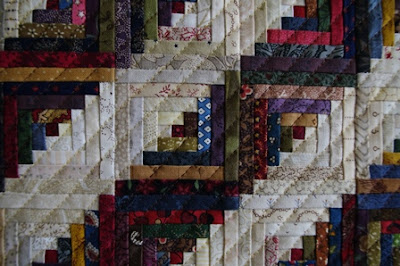 This miniature top is done totally from scraps and leftovers, and the backing is a Buttermilk Print fabric by RJR that I've had for likely twenty years. It was purchased at a wonderful little shop (that no longer exists) in St. Agatha, west of Kitchener-Waterloo, Ontario. I remember well my visit there (and considerable “stash enhancement”.)
I added a very narrow flat piping between the two borders. 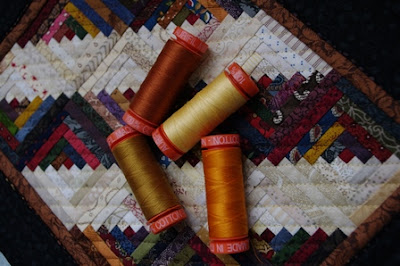 The quilting is simple, as best suits a miniature, with straight lines done with my walking foot. I had several spools of lovely Aurifil fall colours, any of which I thought would work well, but it turns out I liked the soft yellow (#2130) best for the light areas and I didn’t like any of these colours on the darks so I ended up using a soft medium brown. Black Aurifil thread was used on the black border for several concentric rows.  I’m not 100% sure this is totally finished. I’m thinking of adding a bit of appliqué in two corners of the outer border.... what do you think?  Still pondering... 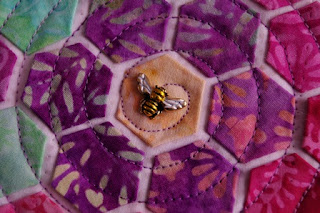 If you read the previous post on my Winter Blossom miniature here, you might like to see the “final touch” I've added. Since it was somewhat of a joint project with my friend Karen Neary, and since she is an apiarist (beekeeper) I knew I just had to add a little bee. Thanks to my friend Sandi for finding me the perfect little honeybee, and thanks to Sheila for bringing her home from Florida.
Up next, several more small project finishes.
I am linking to Wendy's Peacock Party link up. Check it out here.

Quilters are not greedy, they are just “materialistic.”
Posted by Linda H at 11:44 PM 6 comments: 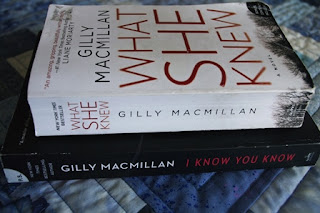 I guess there's one good thing this bitterly cold weather is good for... reading! We're into February now, so that's progress. However winter could hurry along and I wouldn't be one bit sad. I'm trying to ignore the cold weather and snowstorms and just immerse myself in good books, quilting projects, comfort foods and Netflix! That's my solution to a long cold winter...   :)
So what have you been reading lately? I am waaaay behind on book reviews, don't know if I'll ever catch up! Today I'll share with you four recent reads by the same author- Gilly Macmillan. After several "bookworm friends" told me I had to read What She Knew, I took their advice and wasn't disappointed. I read her next three as soon as I could get my hands on them: The Perfect Girl, Odd Child Out, and I Know You Know, and I'm sure I'll be reading The Nanny when it comes out this year. 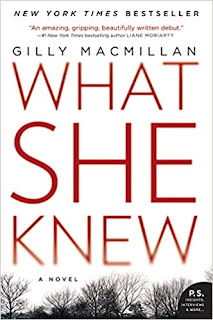 What She Knew, set in Bristol England, tells the story of an eight year old boy's disappearance and the ensuing search for him. His mother Rachel tries desperately to not fall apart as hours and days pass with no signs of her son Ben. Everyone surrounding Ben becomes suspect, from Rachel's newly married ex and his wife, to Rachel's "perfect" sister, to eventually Rachel herself. Macmillan does a fine job of convincing you the reader that you know "who did it," as each character comes under the harsh glare of suspicion. The story is told by Rachel and by lead detective Jim Clemo. I felt like I was in the middle of the police investigation, complete with the use of social media posts concerning the case. The characters are solid, and one cannot help but feel sympathy for what Ben's family are going through, understanding their angst. What parent could not relate? I know this is an over used line but I truly found it hard to put this book down. The chapters are short, which made it so easy to keep telling myself "just one more chapter..." An impressive debut novel. Of the four, I enjoyed it the most. 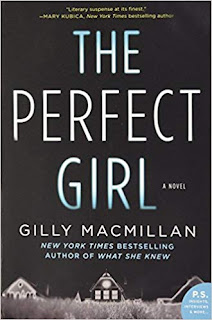 From the book jacket of The Perfect Girl: "Zoe Maisey is a seventeen-year-old musical prodigy with a genius IQ. Three years ago, she was involved in a tragic incident that left three classmates dead. She served her time, and now her mother Maria, is resolved to keep that devastating fact tucked far away from their new beginning, hiding the past from even her new husband, and demanding Zoe do the same.Tonight Zoe is giving a recital that Maria has been planning for months. It needs to be the performance of her life. But instead, by the end of the evening, Maria is dead.
In the aftermath, everyone - police, family, Zoe's former solicitor, and Zoe herself - tries to piece together what happened. But as Zoe knows all too well, the truth is rarely straightforward, and the closer we are to someone, the less we may see." A good read as well but it just didn't seem to hold my attention like the first one did. 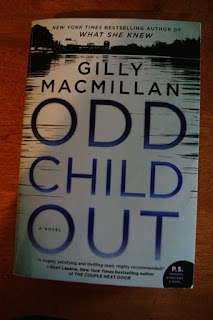 Odd Child Out, Macmillan's third novel is the second to feature Detective Jim Clemo, back from a compulsory leave after the Ben Finch case. From the book jacket: "Best friends Noah Sadler and Abdi Mahad have always been inseparable. But when Noah is found floating unconscious in Bristol's Feeder Canal, Abdi can't- or won't- tell anyone what happened.
Just back from mandatory leave following his last case, Detective Jim Clemo is now assigned to look into this unfortunate accident. But tragedy strikes, and what looked like a simple case of a prank gone wrong soon ignites into a public battle. Noah is British. Abdi is a Somali refugee. And social tensions have been rising rapidly in Bristol. Against this background of fear and fury, two families fight for their sons and the truth. Neither of them know how far they will have to go, what demons they will have to face, what pain they will have to suffer. Because the truth hurts."
I found this novel more engaging, more suspenseful. Macmillan has again developed her characters well and family dynamics and secrets play a role in the tension between the two families. Racial tensions and prejudice stirred up by a reporter, and Abdi's subsequent disappearance make the case more difficult. Just what did happen that night at the canal?  Another novel very difficult to put down... 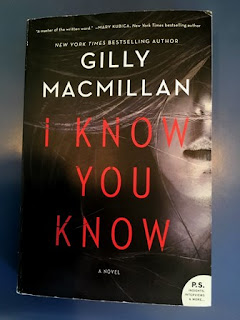 I Know You Know, the story of two Bristol murder cases twenty years apart, is truly a "whodunnit" with lots of twists and unexpected turns to keep you guessing until the end. Cody Swift returns to Bristol to launch his own investigation into the murder of his two childhood best friends, eleven- year-olds Charlie Paige and Scott Ashby whose bodies were dumped near a dog racing rack. Although someone had been convicted of the crime, Swift was not convinced the case was truly solved. Lingering questions and doubts compel him to take matters into his own hands, hoping to find answers and uncover missed evidence. When another body is found in the same location, old files must be opened to see if the two cases are connected. The clock is ticking...
Another suspenseful story, it held my attention to the very end. If you haven't read any of Gilly Macmillan's novels, do give them a try, but if you read at night in bed as I do, and you have to get up early, maybe you should wait until the weekend, as I'm sure you'll find it hard to put the book(s) down and turn off the light.. don't say I didn't warn you...

What have you read recently that you found hard to put down?

My favourite game is called "How many chapters can I read in one night?"
Posted by Linda H at 7:12 PM 7 comments: