I joined the local Embroiderer's Guild last October. I had belonged years ago, but let my membership lapse as I just became too busy with two young children. So now that they have both flown the coop, I mean nest, I decided to re-join this year. A number of the faces were familiar to me and it's good to renew friendships.
In January a new project was presented to us with all materials ready in a kit. I decided to jump in and give it a whirl. Barb did up the kits with silk fabric, all threads, needles and instructions. I believe she designed the piece as well.
Quoting from her introduction: "Embroidery has been a part of human society for all of recorded history. Before then, archeological evidence(embellished fabric and animal hides) suggests that needlework existed in one form or another much farther back in prehistoric times. As humans travelled or migrated they exchanged goods and knowledge, including embroidered fabric and embroidery threads.
1558-1603: Elizabeth I of England was an accomplished embroiderer who greatly influenced needlework. Her keen interest spread throughout the upper classes. Small embroidered items were often presented as gifts to hosts of social functions. During this time the middle class gained some disposable income and began emulating the embroidery of the upper classes. As a result, Sumptuary Laws were enacted to restrict the use of embroidered clothing to only those earning a certain income. (Imagine!!) 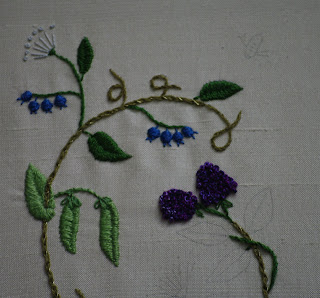 During the Elizabethan period, the depiction of botanical subjects were popular. Since gardens were also popular, they became the inspiration for embroideries that depicted colourful and subtly shaded flowers, vegetables, trees, landscapes, animals, birds and insects. Often a number of plant types would sprout from a single branch or stem, as in this project."
Reference: Alderson, Chottie. A Quick Run Through History.
Internet: http://www.needlepoint.org/archives
So.... above is my piece, progress so far...What you see is the upper section. There is still more to be done. I haven't done embroidery this fine for quite a while, but I must say I'm enjoying it. Most of it is done with one strand of floss. Stitches so far include wrapped chain stitch, stem stitch, satin stitch, padded satin stitch, fishbone stitch, straight stitch, and French knots. I'll post another photo when it is done. Now that the Olympics are over, perhaps I'll progress more quickly. I sure didn't accomplish much last night during that Hockey Game!! Way to go Sidney Crosby! What a great feeling- seeing a Maritime boy score that golden goal!!
Piece,
Linda
I AM Canadian..and proud of it!
Posted by Linda H at 8:04 PM

This embroidery is so nice. It's nice to go to a guild and get motivation to do something different. I am with you on the hockey. I intended to hand stitch during the game as well. I didn't get anything done. It was tooooo stressful.

Beautiful work Linda. I was unable to do any sort of handwork during the game too. Didn't want to miss a thing. That was too close for comfort at times. Looking forward to seeing this darling piece when you finish it. Lucy

That would be interesting to embroider on silk. Do you hoop your work?

Yes Karen, I have used a hoop on this piece. I don't always use a hoop when doing CQ or cross-stitch, but this work really requires hooping.