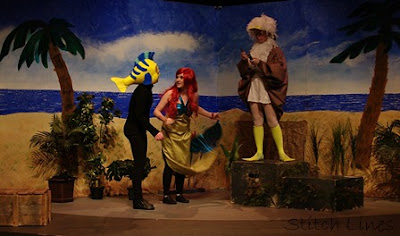 On Friday evening  I was thrilled to attend the performance of the Theatre New Brunswick Theatre School Musical production by the Intermediate students. My great-niece Mallory had the lead role as Ariel in The Little Mermaid. It was presented 3 times this weekend at Black Box Theatre at STU. Although I took photos throughout the performance, it was too dark to get many good photos. (The lighting was low and the entire interior of the theatre is painted black!) But here are a few... 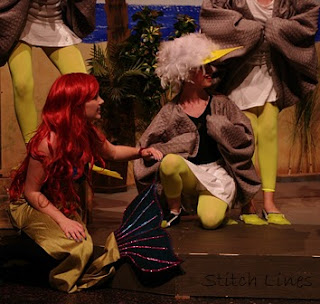 I was so proud of her. She did an excellent job - she is a good little actress with great facial expression and body language. And she has a beautiful singing voice! She was totally in character the whole time and not once did she even show any recognition of anyone in the audience. Of course she is wearing a wig in these photos (as all the mermaids did) - but don't you think she looks good as a redhead?
Unless you have been involved with a musical production, you have no idea of the time that is spent in rehearsals and practice. Such committment! 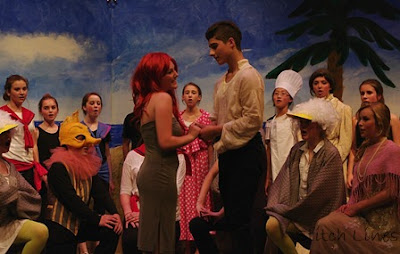 Next year she will move up to the Senior TNB Theatre School group, so will be "low man on the pole" again, and may have a smaller role, but you can bet I'll be there, front and centre, once again. I wouldn't miss it!

Here is Ariel with Flounder and Sebastian (left), with Ursula the Sea Witch (middle), and with one of her mermaid sisters (right).

"I'll tell you a tale of the bottomless blue,
And it's hey to the starboard, heave ho,
Look out lad, a mermaid be waiting for you,
In mysterious fathoms below."

(lyrics from Fathoms Below, The Little Mermaid, by Howard Ashman)

Mallory is a beautiful girl and I'm sure this musical was wonderful to see. I hope she continues on in her acting/singing career. The costumes are beautiful.