Yet Another Great Read...

How many favourite authors can one have? Well, I don't care... I'm adding another new fav to my list! I've just discovered Canadian writer Susanna Kearsley, and if you aren't familiar with her, well you should be! If you are a fan of Diana Gabaldon or Mary Stewart, you'll love Susanna Kearsley! Her historical fiction is  well researched and so well written. She weaves together the two strands of her story - present day and historical past - so seamlessly that the movement from one to the other (which sometimes bothers me) was smooth as silk. Her characters become real  and you are soon drawn into the story... Yes there have been more than a few nights lately when I've still been reading at 2a.m. and not wanting to stop... 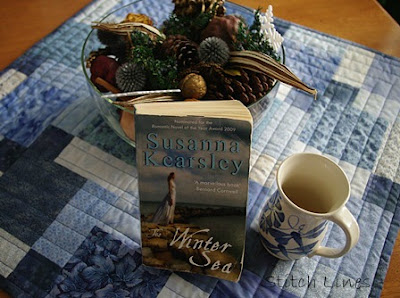 The Winter Sea is my first Kearsley read, but it won't be my last. (Next on my list is The Rose Garden, and then the "sequel" to The Winter Sea, The Firebird, due out this April.) The Winter Sea fits several genres- historical fiction and romance - in fact it was nominated for Romantic Novel of the Year in 2009. It's also a "time slip" story and the first time I had heard of something called "genetic memory", an interesting concept and very believable... Love, intrigue, rich historical detail, this book has it all, and I didn't want it to end. Now I'm suffering from "Book Hangover"...see below...

When bestselling author Carrie McClelland visits the ruins of Slains Castle in Cruden Bay in Aberdeenshire Scotland, she is swept away by the rugged and stark landscape. What a setting for a novel!! The area seems faintly familiar to her but she puts aside her feelings of unease and moves into the local area to write her next novel, using the castle as her setting and one of her own ancestors, Sophia, as the heroine. Then Carrie realizes her writing is taking on a life of its own. As Sophia's memories draw Carrie more deeply into the Jacobite intrigue and events of 1708, she discovers a captivating love story....

Book Hangover: Inability to start a new book because you're still living in the last book's world.
Posted by Linda H at 11:46 PM

I've never heard of book hangover before but I have felt it. I still go back and think about Factory Voice by Jeanette Lynes.

Great review and write-up Linda. This sounds intriguing and I love historical novels. How long ago was it published?

Sounds like another great read Linda. I love your book reviews!

Yes! Finally a name for it...Book Hangover! I love Diana Gabaldon and will have to see if my library has The Winter Sea. downside, when I get into a good book I don't want to work/quilt. sorry Mam, your quilt didn't get done this week because I was visiting the Scottish cliffs lol!

I love book reviews from fellow bloggers; a good way to find good things to read.
Thanks for sharing.
Judith

I was so intrigued by the story line that I hunted a copy down at my local library and I am now spending all my spare time at a small cottage balanced on the Scottish cliffs... ;);) Like Shelley said - not a lot of stitching is being done...