Jack, Where Are You? 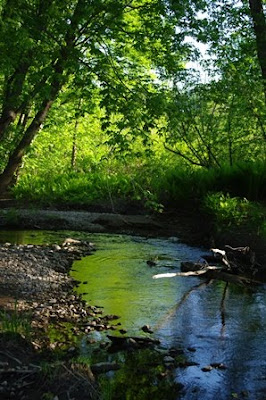 Each spring I wait in anticipation to see if all my plants have survived the winter. I do a little happy dance when each one pokes through the soil, and when one doesn't appear... well, like a Mom, I worry. Often, my worry is for nothing as "the missing" appears a few days later... But this year, there was no Jack.
When we added my studio to our house, it was built on the northwest end, and the following spring, I convinced hubby that I had to extend the front hosta bed around the corner and across two sides of the studio foundation. I added seven more hostas, some ferns and several other plants which would tolerate the total shade, as this corner of the "hacienda" never sees the sun. A friend offered me a Jack in the Pulpit from her garden and I quickly accepted, having always been fascinated with these plants as a child. But this spring- no sign of Jack. I checked every day, sure I was looking in the correct spot (half way between this hosta and that fern...)
So I suggested to Laura that we go up to our local elementary school and do the nature trail which winds down by Garden Creek. This trail was developed several years ago and takes the hiker through four distinct habitats - forest, grassland, wetland and creek. From many visits over the years to this area, I knew there are Jack in the Pulpits growing in the forestland on the hillside sloping down to the creek. I wanted to see if they were 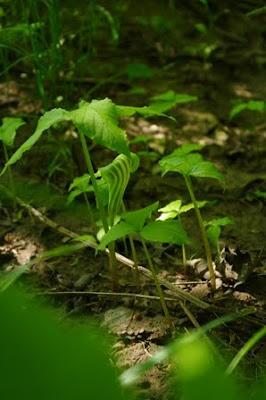 up and "blooming" yet... And sure enough, there they were - lots of them. So I figured mine was a goner for sure. These ones were in "full bloom" sporting good sized Jacks- and there was no sign of mine even breaking through the earth.
(Jack in the Pulpit is sometimes confused with Poison Ivy or Trillium because of it's three leaves. It is a most interesting plant and is famous for it's sex change performances, meaning the plant can be male, female or both, depending on it's environment the previous year. "Jack" has many nicknames, including brown dragon, Indian Jack, wood pulpit, little pulpit, starchwort, cuckoo flower, devil's ear, dragon root, Indian turnip, pepper turnip, marsh pepper, swamp turnip, bog onion, priest's-pintle, lords and ladies, and Indian almond! The plant is poisonous as it contains calcium oxalate crystals. It was used as a native medicinal, treating sore eyes, rheumatism, snakebite and bronchitis.)
We enjoyed our little hike- we spent about an hour, and did the entire trail, visiting all four areas. We saw a pair of mallards and a very chatty red squirrel, and lots of deer and raccoon tracks in the mud beside the creek. It turned out to be a very pleasant hour spent with dear daughter, and our cameras. After doing the "official trail", I took Laura on another little walk (down my memory's lane, so to spe 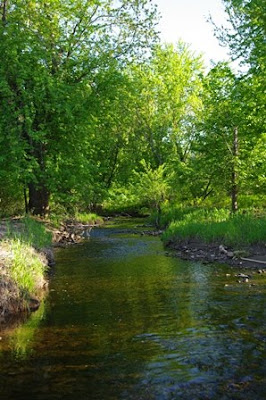 ak) where I used to go as a child on hot summer days when we used to wade in the creek... It looked a little different, 45 years later... it's grown up just a bit...
There's a happy ending to this little story.. several days later, when once again checking for "my" Jack, there he was!! I guess with the cool wet spring we have had, and such a sheltered corner, he was just late "getting up"... He is growing, but I think it will be a few weeks yet before Jack is in his pulpit. We won't tell him how late he is for church!! **wink**
And speaking of Laura, since some of you have been asking how she's doing... she's doing just fine! She's back to work at her beloved Kings Landing, in the Morehouse house (1820) this season, again as a costumed interpreter. Always looking for an opportunity to practice her Journalism skills and add to her resume, she is working on several other small projects as well- more about that later... She is still adding to her MRH Blog, and this past Friday there was an article in our local newspaper about her trip; you can read it here. She has had over 4,500 hits on her Blog- she is thrilled.. and amazed! Thanks to all of you who have taken the time and had the interest to read her thoughts.. we all appreciate your support.

"Jack in the pulpit 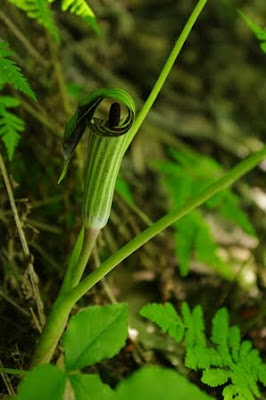 Preaches to-day,
Under the green trees
Just over the way.
Squirrel and song sparrow,
High on their perch,
Hear the sweet lily-bells
Ringing to church.
Come hear what his reverance
Rises to say,
In his low-painted pulpit
This calm Sabbath-day.
Fair is the canopy
Over him seen,
Penciled by nature's hand,
Black, brown and green.
Green is his surplice,
Green are his bands,
In his queer little pulpit
The little priest stands......."

Beautiful trail. I walk trails every day, but I don't think I've ever been on that trail. In the woods surrounding our cottage, we've been seeing pink, purple and white trilliums. They are very nice, and so dainty to watch. I must look for Jack in the pulpits to see if we have any. I knew Laura would get lots of hits. It is an impressive article. Nice post. Gail M.